(SEMYO) will award Ryan Anderson, Grade 7-12 Band Director at Dover-Eyota public schools, the Bravura Award for Inspiring Student Excellence Through Music Education in Our Local Community. Anderson was selected by a committee of music educators and community members in honor of his hard work and dedication towards creating meaningful opportunities for his students at Dover-Eyota public schools. Ryan Anderson will be honored with this award at SEMYO’s annual It’s Instrumental gala which will be held this year on Friday, October 29 from 6:30-8 PM at Somerby Golf Club. It’s Instrumental is sponsored by First Alliance Credit Union and proceeds go to benefit SEMYO’s youth orchestra and outreach program.

Ryan Anderson is starting his 17th year of teaching 7-12 bands at Dover Eyota High School in Eyota, Mn, including concert, jazz, marching and athletic band performance. The Dover Eyota band recently was recognized nationally as a semifinalist for a Grammy Award for Music Education and in 2021 the DE Concert Band was chosen as a featured ensemble at the Minnesota Music Educators Association mid-winter clinic. Before teaching at Dover- Eyota, Anderson taught at Litchfield Middle School as instructor of 6-8 choirs, beginning band, 6th grade jazz ensemble and drumline instructor. In 2021 Mr. Anderson was also honored at Teacher of the Year at Dover-Eyota High School. 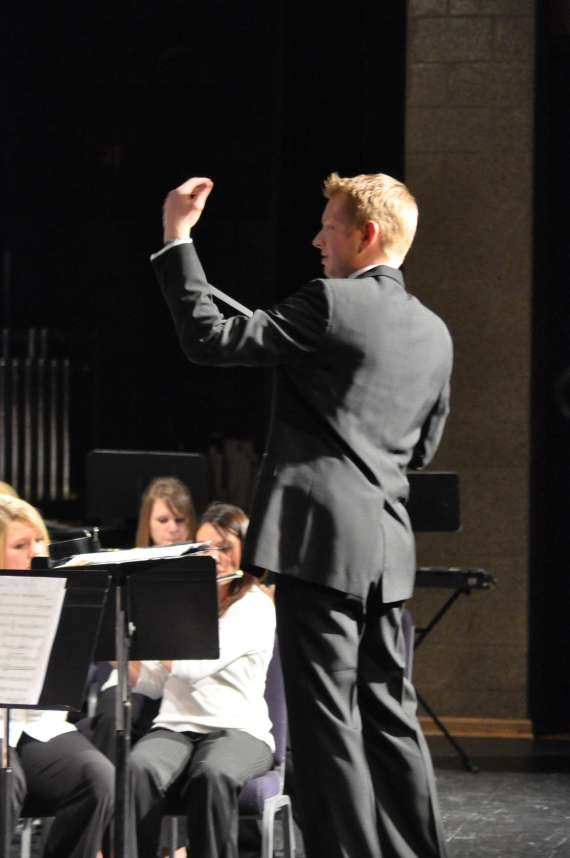 Prior to becoming a band director, Mr. Anderson grew up in Dawson, a small town in West Central Minnesota, and graduated from Dawson-Boyd High School which he describes as having a thriving arts program despite being a small rural community. After participating in band as a percussionist and signing in choirs he continued his musical studies at the University of Minnesota, Morris. Anderson attributes the excellent music and jazz program at U. of MN, Morris along with his instructor Jim “Doc” Carlson for inspiring him to become a music teacher. He writes about his mentor Doc Carlson:

Doc Carlson was not only brilliant, but very humble and had so much FUN playing/ teaching music! I then realized that was not only what I wanted to do, but that was HOW I wanted to do it. Doc knew all the instruments, memorized all the parts/ chords of anything he ever played, but cared for you so much that he could not eat an apple in front of you without offering it to you first- and then he would ask again, “Are you sure? I know college kids don’t always have a lot of spending money.” He always demonstrated love for the humans around him and deep respect for the craft of music. I have tried to do that in my life as well.

Mr. Anderson went on to receive a degree in music education from the University of Minnesota, Morris, a Master of Arts in Education from the University of St. Catherine and is currently doing additional graduate work at the VanderCook College of Music in Chicago where he is studying social emotional learning in music education, jazz studies, and instrumental methods.

In addition to his studies and teaching, Mr. Anderson enjoys serving as guest conductor and clinician at local, state, and regional music festivals and Minnesota State High School League contests. He is also a vocal advocate on the importance of music education. When asked why he thinks music education is important, Mr. Anderson states:

Music is for EVERYONE. It is indigenous to our cultures and adds meaning to our human experience. Music education gives young people identity. When a person has a feeling of belonging to a music group, they are all important. There is no second string or alternate ensemble members. They ALL participate and matter. Don’t we need to affirm that regardless of our life story, finances, skin color, sexuality, gender, and language?  We all are important people! Music teaches empathy, emotion, teamwork, self-discipline, and creativity. It is an outlet of expression on a therapeutic level that every person needs access to. Music is personal, while connecting people across cultures and generations. Music changes lives!

Mr. Anderson is the sixth recipient of the Bravura award, which is awarded annually to a music educator in Southeastern Minnesota. Past winners include Joseph Mish, Aaron Cole, DeAnn Spencer, Amanda Kaus, and Lori Ringen.